This time last year, I was sitting on a plane headed back to Phoenix when I struck up a conversation with my seatmate. She was a pretty black musician going home to Montana. We talked about  music, the gig life and other randomness. Then the man sitting next to my left begins to converse with us because he just had his novel, which takes place in Billings, published. We talked for a good hour or so and it was a very cool experience to see an author out in the wild like that. Later I bought The Porcupine of Truth and I’ve been holding on to it in hopes that one day I would meet the author again and have him sign it.

Here we are, a year and some days later, and it happened! I saw the Bill Konigsberg would be at a Barnes and Noble signing is books and speaking. When I got there, I sat in the car to put on some lipstick and I got way too excited and dropped the open tube on my white shirt. Grrr! Anyway, I approached the door to the bookstore and there he was, holding it open for me. I played it cool though and acted like a normal person. I walked around the store for a while and then set out to find him again.

Long story short: I didn’t act like a total fool, Mr. Konigsberg signed my book and remembered me! He even remembered that I was an actress; he was super cool! 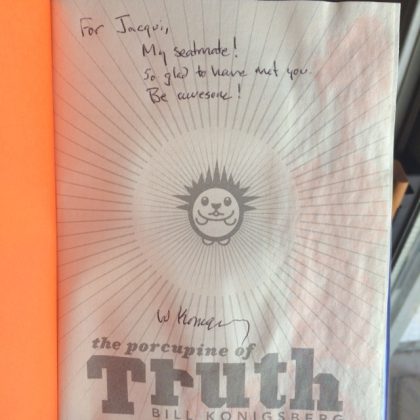 author, author sighting, bill konigsberg, book, books, lbgt lit, out and about, summer read, the porcupine of truth, YA